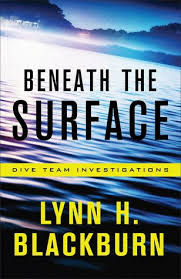 I love mysteries and suspense novels and that’s what drew me to read Lynn H Blackburn’s newest book Beneath the Surface, the first book in the Dive Team Investigations series.

The story begins with homicide investigators, Ryan Parker and Gabe Chavez, training for underwater crime scene investigations when they discover a body.  What started out an exercise has now developed into a murder investigation.  To help with the logistics, Ryan reaches out to a neighbor and old friend, Leigh Weston, to see if the police can use her dock for a few days.

Soon, Leigh has some troubles of her own when she’s driving from home from work and her brakes give out.  Was it mechanical failure or something more nefarious?  Ryan and Gabe’s case load just got busier as they take a closer look in to Leigh’s accident.

What I liked best about this book are the very likable characters.  They are people I would like to know, I cared about them and about what happened to them.  It’s made all the more interesting as the mystery unfolds with new developments in both cases and unexpected twists.  I found the underwater crime scene investigation fascinating and enjoyed trying to figure out “who done it.”

Something the character Ryan said in the first chapter, “No one deserves to die forgotten.”, drew me in and I knew I would like this story.

I appreciated how Lynn wove the Christian faith into the lives of some of the characters and I hope that aspect of the story continues to be developed in the next book in this series.  Lynn’s knows how to tell a good story without resorting to filthy language or sexually explicit scenes.

There were times that the story seems to drag a bit as the story unfolded.  But it didn’t bother me too much because I liked the characters and interesting storyline.

Lynn Blackburn is an author who is new to me and she’s going on my list of authors whose work I want to read.  I look forward to reading her earlier and future novels, especially book two of this series.

I would like to thank Revell Publishing and NetGalley for the opportunity to read Lynn H Blackburn’s new novel Beneath the Surface in exchange for an honest review.  I was under no obligation to give a favorable review. 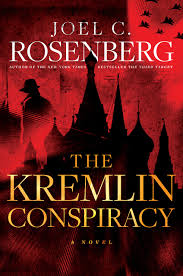 Joel C. Rosenberg is one of my favorite authors.  If he writes a new book, I want to read it.  So glad that I had the opportunity to read his latest book, The Kremlin Conspiracy.

What newspaper can you pick up today where you aren’t reading another article about Russia?  Do the headlines about the Russian President, Russian journalists being murdered or former Russian spies being poisoned grab your attention?  If so, you will want to read Joel’s newest book, The Kremlin Conspiracy, which seems to have been ripped from today’s headline news.

The Kremlin Conspiracy is a novel about the increasing tensions and threat of a military show down between the United States of America and Russia.  Why in the world is Russia making a bold, but irrational, overreach of power?  Though set on the world stage, Joel make this story personal by following the lives of Marcus Ryker and Oleg Kraskin through their relationships, work and the people that surround them, some of whom are powerful and influential world leaders.  When their lives intersect how will they be changed?  The reader comes to know and care about these people as their countries come closer to being on the brink of war.

From page 1 until the very end Joel holds the reader’s attention.  One way I can tell if a novel is really good, is when I put the book down I’m still thinking about the characters and wondering what will happen next.  There are some surprises in this story and you will be kept on the edge of your seat.  I’m already looking forward to the next book in this series.  I sure hope that Joel writes it quickly!

Something I especially appreciate about Joel’s books is that he weaves the Christian faith into some of the characters.  I like that he is able to write an interesting story that doesn’t include filthy language or details about sexually immorality.

If you like suspense novels or fast-paced political thrillers that keep you up at night, you will want to read Joel C. Rosenberg’s newest novel, The Kremlin Conspiracy.  You won’t want to put this one down!

I would like to thank Tyndale House Publishers, Inc for the opportunity to read The Kremlin Conspiracy for free in exchange for an honest review.  I was under no obligation to give a favorable review.