Terri Blackstock is on my list of writers, that when they write a new book, I want to read it.  I’m so glad I had the opportunity to read her newest book Catching Christmas.

This story is a little different than most of Terri’s books.  The book centers around three people, Finn, Sydney and Callie, who don’t have a lot in common.  But circumstances have a way of creating some unusual bonds, especially around Christmas.

Take Finn for example, he’s a cab driver and for him, time is money.  His life is about to get more complicated when he picks up his next fare.  Callie, an older woman in a wheelchair, seems to be taking a little nap when Finn arrives and she needs transportation to a doctor’s appointment.  Who in the world sends their grandmother to the doctor via a cab?  Meet Sydney, Callie’s granddaughter, who is burning the candle at both ends and just trying to keep her new job, thus the cab for her grandmother.

Terri has way of making her characters very relatable and real.  My favorite character was Finn, a little gruff on the outside, but deep down he has a tender heart, a guilty conscience and wants to get it right this time.  Callie reminds me of my mom in her latter years.  Only with Callie…I could laugh at some of the embarrassing uncomfortable moments.  I related to Sydney too and felt like I had walked in her shoes.

The Christian faith is talked about some in this book.  Callie is a Christian and she loves Jesus and talks to Him and about Him to others.

I would like to thank BookLook and Thomas Nelson Publishers for the opportunity to read Catching Christmas by Terri Blackstock in exchange for an honest review.  I was under no obligation to give a favorable review.

It was the title, Hidden Among the Stars, that first caught my attention.  The storyline drew me in and made me want to read Melanie Dobson’s newest book, an author whose writing is new to me.

The story takes place in two periods of time and in two places that intersect as character Callie tries to find out who Luzia and Annika were and if perchance if one of them was related to her beloved friend Charlotte.

Luzia, Annika, Max and Hermann lived in Austria during the late 1930’s and their lives were forever changed as the were caught up in the war when the Nazi’s swept in to Austria.  Eighty years later and 5,000 miles away, Callie is drawn into trying to solve a mystery that was discovered in a children’s book.  Will Callie step outside her comfort zone to solve a mystery and discover the truth?  Will she let down her walls long enough to open herself the possibility of finding love once again?

Hidden Among the Stars was very different kind of book, but I really liked it.  I especially liked the characters from the 1930’s in Austria.  The characters came to life and the situations that they faced as their beloved country was overrun by evil was very compelling.  How would they respond when the anti-Jewish Nazi mentality grew and overwhelmed Austrians?  Fellow neighbors, were they now friend or foe?  Would they protect and try to help their Jewish neighbors?  It was both horrifying and captivating to see what they faced and how they responded to evil in their midst.

The modern-day part of the story took a little while for me to get used to because it was written in the first person, but the rest of the story was not.  After a while, I got used to it.  While I liked the characters, they didn’t seem as real or rich as the 1930’s characters.

The author includes faith in her story and the Gospel message was shared.  I appreciated that the author didn’t include profanity or sexual immorality in the story.  She delicately handled a scene where one of the characters was raped.

As the story unfolded, I figured out some of the mystery, but not all of it.  It kept me guessing until the end.

I would describe the book as satisfying and intriguing.  It unfolds and develops slowly, but that’s okay because you are learning about the characters and what they are going through.  There is some about this book that is almost poetic, probably most visible in the character of Callie.

I recommend Hidden Among the Stars by Melanie Dobson.  If you like mystery, intrigue or historical fiction you may enjoy this book.

I would like to thank Tyndale House Publishers for the opportunity to read Hidden Among the Stars in exchange for an honest review.  I was under no obligation to give a favorable review.

I’m so grateful to be participating in today’s Five Minute Friday writing challenge. If you like to write or need some inspiration and encouragement from others be sure to check it out. 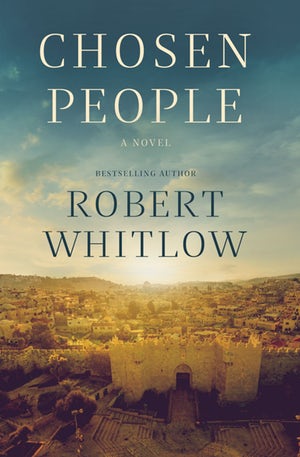 One of my favorite authors that I’ve discovered in recent years is Robert Whitlow.  If he writes a new book, I want read.  I’m so glad that I was able to read Robert’s newest release Chosen People.

This book is a little different than other novels I’ve read by Robert Whitlow.  Like his other books, it involves attorneys and law, but Chosen People is set against the backdrop Islamic terrorism.  It includes characters that are from the Middle East and shows the impact of terrorism at a personal level.

Hana Abboud, an attorney working at law firm in Atlanta, is from Israel and is of Arab descent and a Christian which adds some interesting dynamics and cultural views to the storyline.  Jakob Brodsky, a secular Jewish attorney has agreed to help Ben Neumann and his daughter Sadie bring a lawsuit against any organization or company that funded the terrorists that left his wife Gloria dead and their daughter Sadie seriously injured.

With her background and experience in Israel, Hana is the right attorney to handle this case, if she’s willing.  Jakob is going to batt for a family that may not have much of a case to stand on, much less the deep pockets necessary to handle the comprehensive research and to track down people who funded these morally reprehensible murderers.

Will there be any justice for the Neumann family?  Will the big law firm be willing to take a risk on this case which may go no where or run into many costly obstacles along the way?  Will Hana be willing to take on a case that will bring up ugly savage images that will never leave her memory?  How will she be able to handle this case long distance from Atlanta?  Who will she be able to trust to be her boots on the ground in Israel to investigate the terrorists who perpetrated this savage attack?  Was Jakob’s attack related to the investigation, or was it just a case of being in the wrong place at the wrong time?

Mixed into the storyline is faith, Christian, Jewish, Islamic and agnostic.

I enjoyed the likable characters, found the storyline intriguing and suspenseful as people put their lives on the line to investigate and bring terrorists and those that support them to justice.

I give Chosen People a big thumbs up and recommend it highly.  Robert Whitlow knows how to write great fiction, from interesting characters to a storyline that weaves together intrigue, suspense and faith.  This one kept me guessing to the end.

I would like to thank Thomas Nelson Publishers and NetGalley for the opportunity to read Robert Whitlow’s new book Chosen People in exchange for an honest review.  I was under no obligation to give a favorable review.