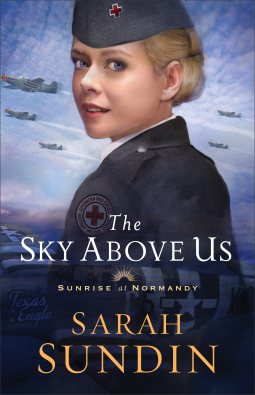 When I find an author whose books I like, I want to read all of them.  That’s why I was excited to find author Sarah Sundin’s newest book The Sky Above Us, which is the second book in her Sunrise at Normandy Series.

The story of the Paxton family continues in The Sky Above Us as we are introduced to the middle brother, Lt. Alder Paxton.  He is making his way to England where he will be stationed with American Air Force in 1943, as they join the battle to prepare for D-Day.  Though he is trying to leave his past behind him, it has a way of catching up.  What are the chances that 5,000 miles from home Alder will see his estranged brothers Wyatt and Clay?  Onboard ship, Alder will meet the lovely Violet Lindstrom who is with the American Red Cross.  She has her sights set on serving as a missionary one day, in a faraway land.  Little did she know that the Lord would open her eyes to a different mission field that would resonate with her heart’s longing and desires.

I absolutely loved, loved, loved this book.  Not only did I like the setting, WWII in England as D-Day approached, but also the characters and how they fit into a pivotal time in our history.  Sarah must have done a lot of research to make the dogfights and battles seem so realistic and easy to visualize.  In reading The Sky Above Us, I got a taste of what the people who lived through that era may have experienced.

Prior to reading this book, I didn’t know much about the history of the American Red Cross and their roll in helping servicemen as they served abroad.  Those women who served were hardworking and brave and they too put their lives on the line.

As much as I was intrigued and fascinated with the setting and characters, I loved and learned from some of the themes in the book.  Forgiveness was looked at from many different angles.  Compassion, mercy, humility, obedience, friendship, self-righteousness, repentance and God’s calling were some of the other themes.

I very much liked Adler and Violet, but my favorite character was Nick Westin.  He was a wonderful friend, mentor, brother in Christ, father and husband.  I’d love to see a book about this character.  He was memorable and very dear.

Not only did I love The Sky Above Us by Sarah Sundin, but I learned from it.  It gave me a deeper appreciation for the greatest generation and what they did to save our Country and the Western world from Nazism.  This is a book I will read again and would definitely give it as a gift.  I took my time reading this book and I didn’t want it to end.  It was so enjoyable to read it at the end of each day.  Though it’s part of a series, it works well as a stand-alone book.

I would like to thank NetGalley and Revell Publishing Group for the opportunity to read The Sky Above Us by Sarah Sundin in exchange for an honest review.  I was under no obligation to give a favorable review. 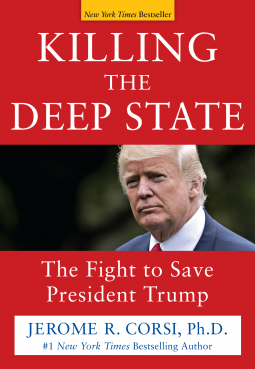 Like so many Americans who enjoy politics, I followed the 2016 election long before President Trump was the nominee, as well as the aftermath which has continued as Robert Mueller’s “investigation” goes on and on.  Because of that I was interested in reading Jerome Corsi’s new book Killing the Deep State – The Fight to Save President Trump.  I wanted to find out what Corsi’s take was on all that’s gone on.

In Killing the Deep State, Jerome goes into a lot of detail on the different aspects of the attacks on President Trump.  Starting with the FBI and the multitude of key players including Comey, Page, Strozok, Rosenstein, McCabe, the Ohrs and Christopher Steele.  We can’t leave out Hillary Clinton and company, nor the Department of Justice with their cast of characters.  How does Julian Assange and the main stream media fit into the puzzle?

But why all the attacks?  It was just another election, right?  It happens every four years, someone wins and someone loses.  What made the 2016 Election different?  That’s where Jerome Corsi starts diving in and unpeeling the Russian Collusion narrative and what’s behind it.  Who are the driving forces and why?

With all that’s gone on over the last three years, I had forgotten some of the happenings.  But Jerome Corsi goes in to great detail to document what’s happened and explain why it’s happened.  This book is well researched and well documented, over twenty percent of the book lists details about the sources of information.

Like Trump or hate him, whether you are a supporter or critic, most people will acknowledge that there have been unprecedented, multifaceted and unrelenting attacks on President Trump like nothing we’ve seen before.

Whether you are a Republican, Democrat or Independent, I think we can all agree that no one should be above the law.  We want our government officials and law enforcement to operate within the law and not corrupt it for their own agenda.  The agenda that someone might support today, because they don’t like the current President, can easily be turned around and used against them by the next administration or group in power.

I do recommend Jerome R Corsi’s book Killing the Deep State.  It was very interesting and if I can be honest, it was kind of depressing.  Reading about corruption within our own government is very unsettling and overwhelming.

If you like politics and want to know what’s happened over the last few years, you’ll want to read Killing the Deep State by Jerome Corsi.  He presents theories as to what motivates and drives the corruption that we’ve seen take place.  You may agree with it or have your own theories.

I would like to thank NetGalley and Humanix Books for the opportunity to read Killing the Deep State by Jerome R Corsi in exchange for an honest review.  I was under no obligation to give a favorable review.