When I brought Daisy home from the Animal Shelter I just thought I was bringing home my newest pet. Little did I know what surprise God had in store.

I thought Daisy was like the malnourished children in Africa with big bellies. Within a couple of weeks…I suspected that Daisy’s tummy was getting bigger…not from food…but from babies growing within. Each night I would hold her in my lap and rub her tummy and feel the babies moving.

Weeks later on Father Day 2001, Daisy gave birth. She had four kittens, Joseph Hoke, Nathan, Moss, and Laura Kitten. Little Joseph Hoke only lived a day or two. But his brothers and sister grew and thrived.

I knew I couldn’t keep all of the kittens…so my mom agreed to take Laura Kitten. I anticipated at some point giving Nathan and Moss away. But before long….I couldn’t part with them. Laura Kitten was at tortishell tabby. But Nathan and Moss were mostly black…with a little white. I held each of the kittens…seconds after they were born and treasured each day watching them grow.

There was always something special about Nathan…Nathaniel. His right hand looks like it has a glove on it…white covered by black. Daisy loved both of the kittens…but she wasn’t the most maternal of mothers. Nathan and Moss nursed long after they should have been weaned. But something changed in Daisy after I had her spade. She couldn’t stand to have those boys near her. She had what I referred to as permanent PMS.

I took the boys in together to have the “snip, snip” operation. Mossy was a fraidy-cat and terrified when we went to the vet’s office. When Nathan and Moss were ready to come 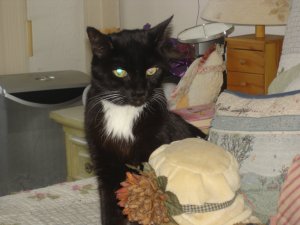 home after the big operation…my friend Dawn went to pick them up. Both were so small that they were able to share a carrier. Dawn wanting to make sure they were okay opened the box and peeked in. It scared Moss to death and Moss proceeded to pee all over his brother Nathan.

From the moment they came home…Daisy hated them. Any time one of them would pass by they would be met with growling and a swipe of the claws. Nathan was protective of his brother Moss. If Daisy got too out of hand with Moss…Nate would go and swat her right upside the head.

Nathan is as smart as a whip. He had this simple little toy called the “Cat Dancer” that was his very favorite toy. He would run himself ragged in pursuit of this toy. I would have to hide it on the top shelf of the linen closet. Nathan kept a watchful eye on this toy…and found a way to get it. He would open the bottom closet doors and jump on the top shelf. From there he would lean out and open the top closet doors with this nose. From there he would maneuver his way shelf upon shelf until he reached his toy in triumph.

Nate loved to play. Even something mundane like putting away groceries became an adventure. Nate would love to dive from the dinning room table into an empty shopping that I held below. I would then swing the bag with Nate in tow. We played that game until he got too big for the grocery bags to hold him.

Nathan and Moss have always been indoor kitties. But that didn’t stop them from wanting to be outdoors…even if that meant sitting on the patio. That is…until the balcony incident.

One day as I was relaxing on the patio…Nathan came tearing through the house and onto the patio. He went to leap on the ledge…but overshot it. I think both Nathan and I realized he was going down. It was like one of those slow mo cartoons…Nathan and I were face to face…I tried to reach out and grab Nate…but down he went.

Before he reached the ground…I was out the door and down to the patio area below to rescue Nate. Now keep in mind…Nate had been an indoor kitty and dirt had never touched his body. But here he was…dazed, dirty and hurting from his fall. I picked him up and gave him the biggest hug…and Nate peed all over me. That was one accident that I didn’t mind…nothing that a little bath wouldn’t take care of.

Well here we are almost sixteen years later…and my precious Nathan is fading away. But I’m grateful for each day.

In October on the last day of the GodBlogCon I stopped by PetSmart to do my regular shopping. When I walked in the door…they were having a pet adoption day. For sometime now…I’ve wanted to get an orange kitten. Don’t ask me why…I wanted him to be orange. In the first cage I found a little orange kitten about 9 weeks old. A boy. I asked to hold him. From the first second I held him…he won my heart. The boy purrs up a storm…and quit loudly I might add. I named him Rudy…and we were on our way home to meet Nathan and Moss. 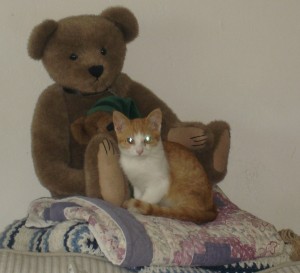 As I brought Rudy home and opened the door to the carrier…Nathan and Moss ran for the hills. They thought Satan incarnate had entered our home. They hid from Rudy for a couple of days….and when they finally realized that Rudy was here to stay…the made peace with him.

Shortly thereafter Nathan got very, very sick. He was in the hospital for over a week. He wouldn’t eat and couldn’t keep anything down. I prayed that Nathan would be well again…but realized that I may have to have him put to sleep. I set a date certain when I would make that tough decision. But miracle of miracles…Nathan made a turn around. The day I was going to have him put to sleep was the day I was able to bring him home.

Nathan came home with thyroid medicine which I have to give him twice a day. It’s bought me more time with my precious friend…and I’m grateful for each day. Yet…I find him fading away…and one day soon will have to have Nate put to sleep. He has not only lost weight…but muscle mass too. My once 15 pound plus pound kitty…is very small these days.

For a while…I wasn’t sure if I should have brought Rudy home. But one night I realized that yes…it was a good decision. Nathan and Rudy were sitting on the end of the bed…and Rudy gave Nathan a bath. Nathan was content and

purring. He raised his head so Rudy could lick his neck and chin. Nathan hadn’t had that kind of love since he was a kitten, cared for by his mama.

In the mean time…little Rudy…who is not so little anymore…gives Nathan and Moss a run for the money. Talk about trying your patience. These almost 16 year old cats…are not always amused by the antics of a 7 month old kitten. But all in all…they are doing quite well.

I’m not sure if he’ll make his 16th birthday. But I am most grateful for each day I have with my precious Nathan.