A commemorative video celebrating the life of my mother, Gayle Merriam Johnson Bunts Lorenat. Gayle passed away on April 29, 2008.
While I write about many things, words evaded me when my mother died. For woman who hated to have her picture taken…she would have been mortified to think that her picture is on the web for all to see. I love looking at her pictures…especially the ones from her childhood and from when she served in the Army as a WAC and from the early days of her marriage to my dad Frank. The last pictures were taken while she lived at Brighton Gardens and they are of a very different Gayle. In the last picture Gayle is embraced by two men, both named Chris, as she danced. They worked with Gayle in the Rem Unit for Alzheimer’s patients. The man on right is the person who with Gayle when she passed away just minutes before I arrived. 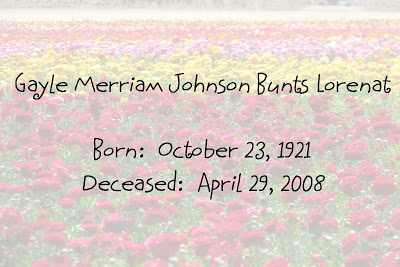