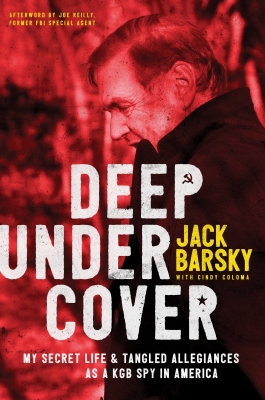 Some books are a pleasure to read and the review is easy to write.  That holds true for Deep Undercover by Jack Barsky with Cindy Coloma.

If you like intrigue, suspense and mystery look no further than Deep Undercover which tells true story of KGB spy Jack Barsky, or should I say Albrecht Dittrich.

I found this book fascinating and of particular interest was Albrecht’s early life.  He was born in 1949 in East Germany, following WWII.  As I read about his early years, I was struck by the contrast between growing up in his war-torn country and life here in the United States of America.

Have you even wondered how someone becomes a spy?  How are you trained to do the job?  What skillsets do you need to be a KGB operative?  What happens if you fail or if you change your mind?  Can a spy have any kind of a real life with a wife, children and friends?  Or is a spy destined to live a life of loneliness where no one really knows him?

Those questions and much more are answered in Deep Undercover which tells about the intriguing life of Jack Barsky.  While his life started much different than your typical American, and his career path took some twists and turns, this man came to love this country and the freedoms that regular everyday Americans have.  The freedom and capitalism that he once fought against, he came to embrace, even at the risk of losing his life.

At the end of the book, Jack explains how he came to accept Jesus Christ as his Lord and Savior.  I especially liked how he shared about God providentially weaving together the circumstances of his life which resulted in him coming to America and ultimately becoming a Christian.

Something I would like to clarify, the statement by Jack’s soon to be wife Shawna, “You are already a Christian; you just don’t know it.”, is not Scripturally accurate.  Jack may have been in the process of learning about Christ and she saw that his faith was growing, but accepting Christ is a purposeful decision.

I highly recommend Deep Undercover by Jack Barsky, it’s a fascinating book.  Be forewarned, this book may keep you up at night so you can find out what happens next.  If you like mysteries and intrigue, biographies, or you just like to know what makes a man tick, pickup Deep Undercover.  You won’t be disappointed.

I would like to thank Tyndale House Publishers for the opportunity to read Deep Undercover for free.  I was under no obligation to give a favorable review.