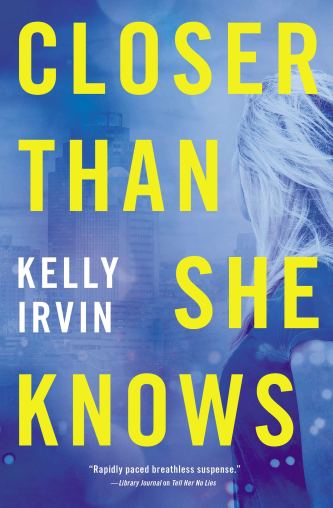 I became acquainted with author Kelly Irvin’s writing through her Amish themed books and was excited to read her newest book Closer Than She Knows.

Closer Than She Knows is about Teagan O’Rourke, a court reporter in San Antonio, Texas.  She comes from a family that works in law enforcement.  Teagan’s life is about to unravel as people around her are being targeted by some sicko and she finds herself at the center of an investigation.  Why are these innocent people being targeted?  How are they all connected?  What can she do to stop this before another innocent life is taken?

One of the things I like about Kelly’s writing is how she portrays relationships with family, friends, and co-workers.  I especially like the O’Rourke family, Teagan, her father Dillon and step-family Billy, Gracie, and Leyla.  My favorite character was her friend Max who seemed like a real gem, and her friends Julie and Evelyn.  They were a tight-knit group that cared for one another and were there for each other.

I found Teagan’s job as a court reporter fascinating and learned a few details about that job.  Kelly does a great job describing the setting in the San Antonio downtown area and neighborhood where historic homes were being rehabbed.  It seems inviting and picturesque.  The story is very suspenseful and will keep you guessing until the end.

This book is written by a Christian author and the Christian faith is part of the story.  The best example of that was Max, a man redeemed and dependent upon the Lord each day.  He was gracious and caring.  I found Teagan’s faith to be immature and nominal.  When talking about her reluctance to having children her explanation seemed very secular and lacking faith.  She seemed to care more about the environment than lost souls and sin.  At one-point, Teagan describes herself in very politically correct terms and does not mention that she is a Christian.  Her understanding of the death penalty was not in keeping with what God has declared in the Bible.  Teagan and Max’s physical attraction could have been portrayed a little less worldly.

If you are a fan of Kelly Irvin’s novels or like mystery, intrigue, and trying to solve a whodunit, you may like Kelly’s newest book Closer Thank She Knows.

I would like to thank Thomas Nelson Publishers and NetGalley for the opportunity to read Closer Thank She Knows by Kelly Irvin.  I was under no obligation to give a favorable review.