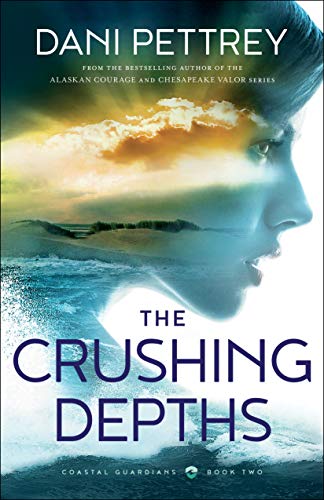 The Crushing Depths by author Dani Pettrey is the second book in her Coastal Guardians series.  The storyline is why I wanted to read this book.

The Dauntless is an oil rig 38 miles off the coast of North Carolina.  Greg Barnes has had a very bad day and he’s looking forward to having a cigarette break.  When he steps outside, he can hear the environmental protesters chanting.  Do they ever take a break?  When he flicks his lighter, little does he know that his day is going to get a whole lot worse.  Was this a tragic accident or something more sinister?  Former friends are reunited when Rissi Dawson and Mason Rogers are called in to investigate the accident as part of the Coast Guard Investigation Services team.  Before investigators can even reach the Dauntless the action heats up.

What I really liked most about this book was the relationship between Rissi and Mason.  Especially learning of their friendship from when they were young.  I liked the support that the CGIS team gave one another and their friendships.  I appreciated that faith was included through prayer.  I would like to have seen the characters personal faith developed further.  It was interesting learning about what it’s like working on an oil rig out in the ocean.  Those are some of the elements that worked well.

I struggled with the book in a few areas.  There were so many characters that it was kind of hard to keep track.  While I liked the characters, Noah and Brooke, I thought that the storyline involving these characters didn’t advance the main story and was almost a distraction.  I think another book about Noah would be good.  There was a lot of action and at times the story dragged switching between the main story and the one involving Noah.

Something that seemed odd was the personal relationships and romance that developed between characters that worked together, especially in light of how that is viewed in today’s culture.  Since there was a deep bond between Rissi and Mason focusing on their physical attraction seemed unnecessary and perhaps not what I would expect in a book by a Christian author.

I thought that the transitions between storylines within chapters could have been handle better.  I would recommend some kind of a break, like a line, to show the story is now focusing on different characters or have shorter chapters.

If you are a fan of Dani Pettrey or like romantic mysteries, suspense or stories that involve the military you may want to read her newest book The Crushing Depths.

I would like to thank Bethany House Publishers and NetGalley for the opportunity to read a complimentary copy of Dani Pettrey’s newest book The Crushing Depths.  I was under no obligation to give a favorable review.