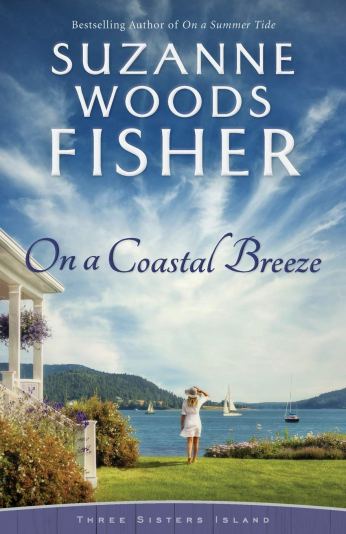 I was excited to read On a Coastal Breeze by author Suzanne Woods Fisher.  This is the second book in her Three Sisters Island series.  The first book, On a Summer Tide, introduced readers to the Grayson family.  That’s where I found myself drawn into their story when Paul buys a summer camp on Three Sisters Island with the hope that his three daughters Camden, Madison, and Blaine will help him get the camp fixed up, and back up and running.

A year has passed since the family undertook this adventure and they are gearing up for another summer season of campers.  They’ve settled into living on the island.  Cam is engaged to Seth and she is throwing herself into a project to help the island be energy independent.  Maddie has finally set up shop as a marriage and family counselor on this small island with just over a hundred year-round residents.  She’s about to get a big surprise when the town’s new pastor makes a memorable entrance.  Blaine is home for summer following a year at culinary school and she has a big announcement.

While the setting at Three Sister’s Island is beautiful, the most intriguing part of this story are the relationships.  Not only within the family but with friends and the town’s people.  The Grayson family is interesting, quirky, maddening, wise, unwise, honest, veiled, committed to one another, loving, and supportive.  The characters grow and change.

Something I especially liked about On a Coastal Breeze is how the character’s backstory was filled in.  Just when a character was making a goofy decision or acting illogical, there would be a scene from earlier in their life that helps the reader to better understand the character and why they were acting that way.

Faith and prayer were part of the storyline, especially with the character Maddie.  But there were some thoughts, attitudes, and actions that were ungodly and unkind.  Something in Maddie’s background was revealed during the story.  I would like to have seen the character recognize sin as sin and repent.  Repentance seemed to be lacking.  Instead there was regret and she seemed to rely on or fall back on psychology.  Yet Maddie had some good insight into people and situations.  Cam and Blaine seem to be distant from God and it was reflected in how they responded to life.  Rick, the new pastor was rather unconventional.  His sermons were not quite theologically accurate.  Instead, they were simplistic and there to make a point and relate to a character.  Overall, while faith was included in the story it was not deep.

What I liked best about On a Coastal Breeze where the relationships and how the characters grew and changed.  I wish faith had been more deeply developed in the characters.  It looks like there will be a third book in this series focused on the youngest sister Blaine and I will likely read it.

I would like to thank Revell Publishing and NetGalley for the opportunity to read a complimentary copy of On a Coastal Breeze by Suzanne Woods Fisher.  I was under no obligation to give a favorable review.