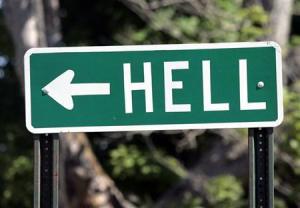 While there have been many days I’ve lamented the fact that I came to the Lord so late in my life (at the age of 32)…I must say there have been times recently where I have been grateful instead. Grateful because I’m keenly aware of my sinfulness and unrighteousness and that I have been saved solely by the grace of God and not by my own works. That means…my salvation is secure. I didn’t earn it, nor deserve it. It was bought and paid for by the perfect sacrifice of Jesus Christ on the cross. It’s a done deal. I’ve been bought and paid for by the blood of the lamb. My salvation can never be taken from me.

Now when I’m a bonehead…and acting in my flesh and choosing to walk according to my own will and plan…then I will have a break in my fellowship with Jesus for time. But the relationship is secure…and I will be restored when I repent and turn back to God.

There have been many a time when I was envious of those who have been Christians for as long as they can remember. Or those who had Christian parents…and raised them up in the faith…and led them to the Lord at a young age. Those who didn’t have many years of wandering in the desert…living in the sin…lost in their sin and facing eternal punishment when they died.

To have such peace…and not have to look back at your life and see some ugly scars…now wouldn’t that be lovely? Indeed!

But I must say…I may have a deeper appreciation for just how great a work my salvation is. A deeper understanding of how close I came to hell. If you stand too close to me…I dare say you may still smell the whiff of smoke from the hell fire that licked at my soul. That is until that day…16 years ago last May when I received Jesus Christ as my Lord and Savior.

While at times…I find the sins that people engage in are repulsive and I want to stand in judgment against them…I still remember all too well what it’s like to live and walk with a mind that is darkened to the things of God. While there is a part of my flesh that wants to take credit or brag that I’m no longer like that…there too many daily reminders that it is but there for the grace of God…there go I.

Self righteousness ought to have no place in this girl’s life…one who not too long ago escaped a destiny in hell…where Satan was looking forward to welcoming me personally.

I started to think back…on what it’s like to have that darkened mind. What were my thoughts…what was my life really like?

But praise God that He had a different plan for me. One that took my darkened mind…and shined the light of His word and brought me to a saving faith in Jesus Christ. Praise to be Jesus…I once was lost but now I’m found.

Frequently I long for, pray for and look forward to the return of my Savior in the Rapture as He comes to take home the church. But even as I pray…I am most grateful that it didn’t happen 17 years ago…otherwise I would likely have been lost in my sins and bound for hell. I’m well aware that there are untold numbers of people that if the Lord returned today…would remain lost in their sins. I pray that one day…they too will know the gratitude that I feel at coming from darkness to light…from death unto life.

Am I not grateful that the Lord is patient…and not willing that any would perish? Indeed I am…more than you know.

Since that darkness is much closer to me than those who have had a lifetime of walking with the Lord…I am passionate about the gospel message. I find I have no tolerance for churches which abdicate their responsibility before God to preach the gospel message. Those that back down from presenting the truth of God’s word…and turn a blind eye to my eternal fate if I die in my sins. All that just so they don’t have to make me feel uncomfortable and see me squirm in the pew if I’m visiting on Sunday morning.

To think that there are Pastors out there that relegate their responsibility of sharing the only life giving Gospel message to home Bible studies or fellowship groups so they can keep their message light hearted so that “seekers” will want to attend church on Sunday morning. That thought makes me want to vomit…I wonder what Jesus thinks?

“I know your deeds, that you are neither cold nor hot. I wish you were either one or the other! So, because you are lukewarm—neither hot nor cold—I am about to spit you out of my mouth.” – Revelation 3:15-16

While I wasn’t in church regularly when I was lost in my sins and facing a future in hell…I was there on occasion. I wonder…would I have come to a saving faith in Christ earlier if I had been presented with the truth? That there is One God…to whom I must give an account for my sins. That I am sinner and bound for hell…but God has provided a way of escape through the atoning death of His Son Jesus Christ at Calvary. If I had heard that message…would I have been spared years spent in sin and darkness?

God tells us how beautiful are the feet of those who share the Gospel.

“And how can they preach unless they are sent? As it is written, “How beautiful are the feet of those who bring good news!” – Romans 10:15

What does Jesus say about those who compromise and soft sell the Gospel?

If I care more about what someone thinks of me…and more concerned that they might reject me…than I do about sharing the Gospel message with someone lost in their sins…than I’ve laid down the Gospel…for what? In doing that I care more about me than the fact they are eternally lost in hell. How might God judge me for such actions?

Will I be grieved when I stand before God as the pages of the Book of Life are opened…and see my works, after coming to Christ, have been recorded? Since that day is coming…ought I not share Gospel message with those who still need to hear it? Share it freely so that they will have the opportunity to hear and receive it?

While some Christians…including me at times…find it easy to look down upon the sinner and their sinful ways…I hope that having escaped hell’s fire not too long ago has given me a compassion I might not otherwise have.

I must ask myself…whom do I need to share the Gospel message with today?

“Then I saw a great white throne and him who was seated on it. Earth and sky fled from his presence, and there was no place for them. And I saw the dead, great and small, standing before the throne, and books were opened. Another book was opened, which is the book of life. The dead were judged according to what they had done as recorded in the books. The sea gave up the dead that were in it, and death and Hades gave up the dead that were in them, and each person was judged according to what he had done. Then death and Hades were thrown into the lake of fire. The lake of fire is the second death. If anyone’s name was not found written in the book of life, he was thrown into the lake of fire.” – Revelation 20:11-15