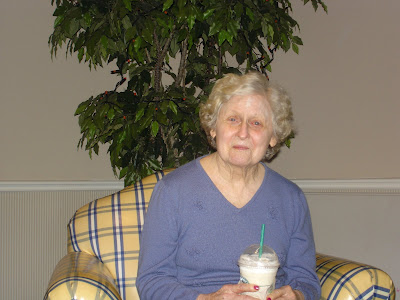 One of the downsides of marrying late in life is that you may not get to know your in-laws.  That’s the case for both Chris and me and we often feel the loss of not knowing them in person, but only through stories.
Actually, Chris was able to meet my mother Gayle when she was in her late stages of Alzheimer’s.  He met her for the first time on Easter Sunday 2008.  It was one of those awkward times you get with Alzheimer’s because she had a mouthful of food that she refused to swallow, nor would she spit it out.  With her mouthful of food she walked arm in arm with Chris back to her room.
She sat on her sofa, next to Chris and to my amazement answered questions Chris asked her about her stuffed dog.  She even gave him a bite of her brownie.  She seemed to take to Chris right away.  But within a matter of days, Gayle was hospitalized for pneumonia and within a few weeks she was dead.
In the ensuing months Chris and I were engaged and married.  Things would happen that would remind me of Gayle and I would tell Chris another Gayle story, of which there were many.
Stories like how she used to hide her used Depends in the closet, or when she would sit down on the floor and refuse to get up, or of the many hospital visits.  One of the most memorable was when she tried to “escape to Vegas” by climbing over the wall, only to hit her head and get an ugly gash on her forehead that needed stiches.
One story that comes up regularly is the logic I had to use with Gayle to get her to do something she didn’t want to do.  I would tell Gayle, “You don’t have to want to do this, you cannot want to all you like, but you still have to do it.”  There was something crazy about that, but it worked.  She was satisfied that I knew she didn’t want to do it.
I think both Chris and I feel a loss because we didn’t get to know each other’s parents and I often wonder what our lives would be like if we had that opportunity. 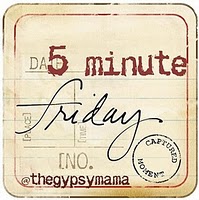 My Five Minute Friday,I mean Saturday submission is a day late again…but I didn’t want to miss the opportunity to participate in The Gypsy Mama’s Five Minute Friday.  Head on over and read the writings of many gifted individuals while you are there.  Perhaps you too would like to try your hand at writing for five minutes and see what comes out.

3 thoughts on “Five Minute Friday – Only Through Stories”