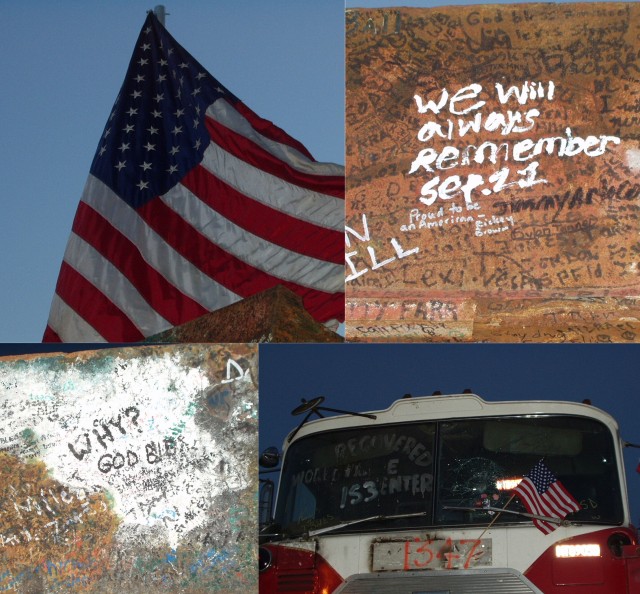 That day is etched
Imagines seared
Permanently in my mind

What kind of person would do this
Intentionally crash a plane into a building
That’s the day, I left naïve behind

Oh the living hell they must have endured
Above the points of impact, now left to choose
Do I jump or die in this inferno

110 story skyscrapers don’t collapse!
Not just one, but two towers came down that day
Dust clouds chasing those who miraculously survived

Unthinkable evil struck again
Another plane filled with precious human souls
Used as a missile, plowed headlong into the Pentagon

The war against evil began that day
It started on United 93
Courageous, heroic passengers said, “No!  We’re taking it back.”

On that day it didn’t matter
Black, White, Asian, Hispanic, Native American
We were all one…Americans United

An American flag flying in the breeze
Saying the Pledge of Allegiance
Singing “Oh, say, can you see” evokes tears

Morning glory Lord! What a beautiful morning...thank You! We are going to have another warm spring day. Lord, I am grateful for the reminder in uncertain times that we need to turn to our Sovereign God. While we don’t know how COVID-19 will impact us as individuals and a country, You do. Nothing has ever taken You by surprise. While I don’t know what might happen, I can look to and trust the One who knows all things and is able to accomplish good in the midst of disease, sickness, restrictions, a wavering economy, and even death. Thank You Lord that I do not need to fear because my salvation and future is secure. Not because of anything good in me, but because of Jesus Christ who willingly bore my sin on the cross so that I could be forgiven. Please give our leaders wisdom in this crisis. Protect doctors and nurses and those who work in the medical community. Protect truckers who everyday bring much needed supplies and productbto hospitals, stores and homes. Help those who have been afflicted by this disease. Bring them comfort and relief. Help them to get the medicine they need and may it be effective in helping them recover. Protect their family members from getting sick. For those who have lost a loved one, draw them close to You and comfort them. We come to You in the name of our great God and Savior Jesus Christ. Amen!