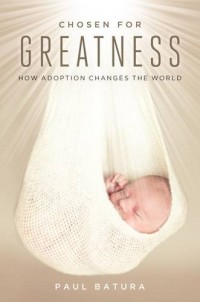 As an adoptee, I’m always curious to read stories about people who are adopted or parents who adopt children. That’s why I was excited at the opportunity to read author Paul J. Batura’s book Chosen for Greatness – How Adoption Changes the World.

I found Chosen for Greatness fascinating, interesting and heartening. In this book, Paul tell about the lives of sixteen famous people who were adopted, including Steve Jobs, Babe Ruth, George Washington Carver, Scott Hamilton, Leo Tolstoy and more. They come from various walks of life and over hundreds of years. The chapters are short, but the reader learns about the adoptee, their pre-adoption circumstances, birth parents and adoptive parents. Most fascinating is to see God’s providential hand in the life of each of these people. In their lives, you can see how perfectly God brought these orphans to just the right parents.

It was sobering to read about the difficult circumstance these children were born into. It made me pause and give thanks for the times we live in. I also saw a resilience in the human spirit. Children and parents who could have easily given up, though perhaps wayward for a season, found a way to persevere and achieve greatness in this life. I found it encouraging to read about parents who adopted children, made a lifelong commitment and sowed into these young lives the seeds that God would use to make the children into the men and women He called and gifted them to be.

Since I’m adopted, I found it particularly interesting to read about what these adoptees felt about their adoption and birth parents. Though sometimes drawn to meet and know their birth parents, they knew their parents were the ones who adopted, cared for and raised them. Parenthood is less about blood and more love and commitment.

This book is written from a Christian perspective. Many of the people whose story is told were Christians or exposed to the Christian faith. I appreciated the reminder from Scripture and the life of the Lord Jesus Christ that adoption is part of God’s story. For His only begotten Son and for those whom He has chosen and adopted as His own.

I would like to thank Regnery Publishing for the opportunity to read Chosen for Greatness by Paul J. Batura. I was under no obligation to give a favorable review.