Recently, I was reading my Joni Eareckson Tada devotional before I went to sleep and something she said really stuck with me.

When reflecting about knowing Christ, Joni prayed, “Lord, I confess that I know more about You than I really know You.  I don’t want to be that way.  Never, never do I want my knowledge of You to be an illusion.  Help me to consider everything a loss compared to the surpassing greatness of knowing You.”

Why would I settle for knowing something about Christ, rather than spend the time getting to know Him and have a deep and growing relationship?

In some respects knowing something about God is easier than having a relationship.  It’s black and white, it’s on a page.  I can add to my growing list of truths what I know about God.  I can check off my box I’ve read my Bible today or prayed.  I can fit it neatly in to my daily schedule.

But’s it’s a whole different thing to spend time and get to know the Lord.  It includes being vulnerable and honest about my failings, fears, limitations and sin.  It’s taking a risk and waiting upon the Lord.  Will He really do what He says He can do?  Will I trust God when He’s silent, when His timing is different than my timing and when His plan looks a whole lot different than my plan?  I will be disciplined and choose to take my every thought captive to the obedience of Christ?  Will I take the time to put on the Armor of God each and every day?  Will I focus my mind when I’m reading the Bible and not be distracted and let my mind wander?  Will I seek counsel from God’s Word rather than from the world, or from my heart which is deceitfully wicked apart from the life changing work of Christ in me?  Will I meditate on God’s Word and let it convict, correct, encourage, strengthen and change me?  Will I set aside the distractions of this world…phones, computers, Facebook, Twitter and allow the silence to quiet my heart and mind?  Will I tune my ear to hear the chastisement of the Holy Spirit?  Will I bend my knee and say, “Thy will be done.”?

Lord, as we begin a new school year and study Your perfect, holy and inerrant Word, I ask You to help me know You more.  I want to know the Bible well, so I can discern truth from error.  But I also want to spend time getting to know You more.  May that time with You change who I am and how I live each day.  I want to trust You more, I want to love You more and I want to unashamedly tell others of the salvation and hope that I found in You Jesus.

This year in CBS we are studying the life of David in 1 & 2 Samuel.  Even though I’ve studied this passage in recent years, I am still learning from David’s life.  Some new things struck me in this week’s lesson on David and Bathsheba.

I can choose my sin, but I can’t choose the consequences I will reap…God does.

I may try to cover up my sin and keep it from impacting and hurting other people, but I have no control over that.

My choosing to sin impacts and influences other people.

This year in Community Bible Study we are studying the Servants of God which includes the books of Joshua, Judges, Ruth and 1 & 2 Samuel.  Despite having gone through this study previous God is still teaching me new lessons through His perfect and inerrant word, the Bible.

In last week’s lesson we saw the end of Saul and his sons.  Saul had started out his kingship with some promise.  He was humble, he chose not to take revenge against those who were against him and he defeated an enemy that threatened to enslave the people of Jabesh Gilead.

Unfortunately Saul’s promising start didn’t last.  Before long he became prideful and was disobedient to God.  That started him on the wide road that leads to destruction until finally the Spirit of the Lord departed from Saul, and the kingdom was ripped from his hand and given to his neighbor David.

It would be many years before David would be king and he learned much about God during those years on the run and often spent in the wilderness.  Thankfully he recorded his praise and worship and poured out his soul during the dark times when he was hunted by Saul.

Something I saw afresh in the life of Saul was God giving him another chance to repent and turn from his wicked ways.

This would be the last time that David would see Saul alive.  When seemingly given another opportunity to kill his enemy, David chose not to kill Saul.  In Samuel 26 David chose to take Saul’s spear and water jug, but not his life.  He called out to Saul’s commander of the army Abner.  But when Saul hears David’s voice he responds.

17 Then Saul knew David’s voice, and said, “Is that your voice, my son David?”

David said, “It is my voice, my lord, O king.” 18 And he said, “Why does my lord thus pursue his servant? For what have I done, or what evil is in my hand? 19 Now therefore, please, let my lord the king hear the words of his servant: If the Lord has stirred you up against me, let Him accept an offering. But if it is the children of men, may they be cursed before the Lord, for they have driven me out this day from sharing in the inheritance of the Lord, saying, ‘Go, serve other gods.’ 20 So now, do not let my blood fall to the earth before the face of the Lord. For the king of Israel has come out to seek a flea, as when one hunts a partridge in the mountains.”

21 Then Saul said, “I have sinned. Return, my son David. For I will harm you no more, because my life was precious in your eyes this day. Indeed I have played the fool and erred exceedingly.” – 1 Samuel 26:17-21

Even in his deteriorating mental state Saul recognized his sin and confessed it.

I believe this was God’s mercy extended to Saul one last time before he died to genuinely repent.

Did he repent?  He said the right words and acknowledged his wrongdoing.  But his actions thereafter don’t demonstrate a repentant heart.  Shortly thereafter Saul sought out a medium because the Lord was not responding to his inquiries.

I know that if Saul had genuinely repented that God would have forgiven him.  God has told us in His Word that a broken and contrite heart He will not despise.

Even the message that Saul heard through the medium was another chance to repent.  He was inconsolable, afraid and severely troubled, but he didn’t repent, he didn’t turn and walk the other way.  What a sad ending to a life.  Soon thereafter Saul and his sons would be killed by the Philistines and there would be no more chances to repent.  It is appointed for a man to die once and then comes judgment.

Lord…please give me a tender heart for You, ears to hear You and a heart to obey You.  Though I am a sinner, please help me to genuinely repent and return to You when I am headed in the wrong direction. 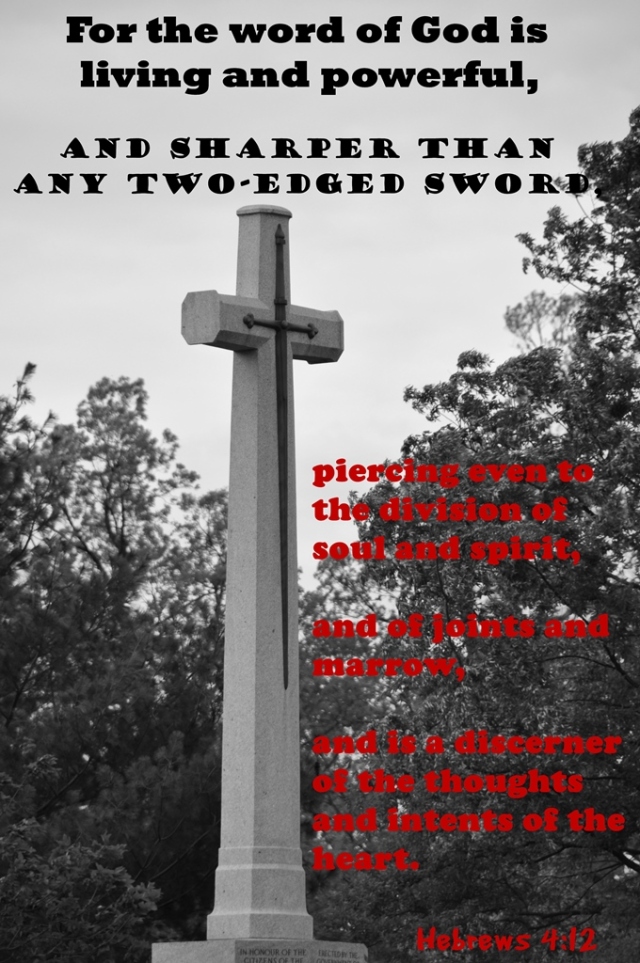 For the word of God is living and powerful, and sharper than any two-edged sword, piercing even to the division of soul and spirit, and of joints and marrow, and is a discerner of the thoughts and intents of the heart. – Hebrews 4:12

This week I was reminded of the truth of Hebrews 4:12 when God used scripture to expose my sinful tendencies to be critical and judgmental.

In Community Bible Study this year we are studying the Servants of God which includes the books of 1 & 2 Samuel.  I had done this study a couple of years ago and was familiar with the people in the scripture, not only with how they started, but how they finished.

Though the Israelites have rejected God as their King and desire an earthly king, so they can be like the other nations, God answers their request.  He gives them Saul as their first king, but not without ample warnings about the consequences of being governed by an earthly king instead of God.  Saul started out with promise, but his life took a left turn and he did not finish well.

As I completed this lesson, listened to the lecture and read this week’s notes the Holy Spirit has convicted me and revealed my sinful tendency to be critical and judgmental.  When I read about Saul’s beginnings, I found myself doubting his good intentions and didn’t want to acknowledge some of the good things that he had done.  He demonstrated humility after Samuel had first anointed him as king.  He chose not to take revenge against naysayers who were against him.  He rose up to defend people who were being threatened by an enemy.  I didn’t want to see the good because I know what’s coming down the line and the left turn that Saul will take.

To reinforce that conviction, early on in the lecture our teaching director Dave said, “Don’t dismiss or think you can’t learn something from someone who turns out to be a bad person.”  He also reminded us that this story isn’t about Samuel or Saul…its God’s story.

When reading this week’s notes I encountered the same thing when it talked about some of the things that Saul did that were good and right.

So how come I want to dismiss that or cast aspersions on his motives and think he wasn’t sincere?  The bottom line is that I don’t know the genuineness of Saul’s heart, only the Lord knows that.  He alone is the One who knows the thoughts and intentions of a person’s heart.  Unless God reveals someone’s motives in scripture then I am imposing my thoughts and interpretation on the text…eisegesis verses exegesis.

Lord…thank You for revealing where my heart and attitude was not right before You.  Thank You for the conviction of the Holy Spirit and the Word of God which is true and unchanging.  Please forgive me for my arrogance in presuming that I could be the judge and jury against someone.  Help me to recognize and repent of a critical, negative and judgmental spirit.  Help me have a heart like Yours.  Thank You that You have given me a heart of flesh and have removed my heart of stone.  Keep doing Your mighty life-changing work in my life.  It’s in Jesus powerful and transforming name I pray…Amen!